Before receiving my Culinary Degree in 1995 from Johnson and Wales University in Norfolk, VA, I had to complete an externship at the restaurants of Keystone Lodge in Keystone, CO. Once I was official, I came back to Memphis, worked at a local French-American restaurant (Bistro 122), and tuned into an episode of Lifestyles of the Rich and the Famous. During the show, I was bewitched with The Peaks Ski & Golf Resort & Spa in Telluride, CO. I faxed them my resume, got hired over the phone, and moved to Telluride 2 weeks later to work. I floated among the stations of grill, saute, salad/desserts, room-service, while also managing a 1-month stint on the mountain as a ski-lift operator to earn extra money and a free ski pass.

I left Telluride to travel for 2 months in Europe, with the original intention to take at job offer at The Ritz Carlton in London. Since I hadn't attained work visa's before leaving the USA, I wasn't eligible to legally work at The Ritz. So...I spent every dime I had and bounced around 10 different countries with a good friend from Keystone. I moved back to Telluride and became the Executive Chef at a local restaurant, Swede-Finn Hall. It was a hard, but fulfilling job and my first as a head chef.

After my soon-to-be husband proposed at the lovely Sheridan in Telluride with snow falling all around us, I moved back to my home town of Memphis, TN, got married, and had 2 daughters. I worked in restaurants around Memphis, opened a catering business, taught cooking classes, consulted & opened 2 restaurants for other people, and started writing a bi-weekly food column for our local newspaper.

While continuing to write the column, I currently work part-part time at Hope Presbyterian Church in Kitchen Ministries with a meal assembly fundraiser, Dinner on Demand, and anything else that has to do with food.

I started The Written Kitchen to capture a persistent nudge to write about food, eating, cooking, & all the escapades that cling to them. It has also opened an avenue for sharing recipes, thoughts, short stories, & food-related happenings from the front lines of my kitchen. I'm truly blessed to have found a career I love and a family that supports it, and the fact that they get fed on a regular basis probably has nothing to do with that!? 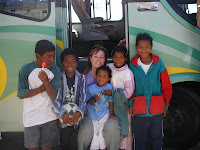 me & the kids in carmen bajo, ecuador... 2006 mission trip (the trip that started dinner on demand) 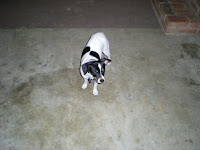 ABOUT ME
COOKING CLASSES
DINNER MAID
a personal chef service